Welcomome to LOVE ON THE LINE TV CONVERSATIONS: Episode 1. Behind the Book

Finally, I get to welcome you to my new venture: LOVE ON THE LINE TV CONVERSATIONS on YouTube. I have been planning to start a YouTube project for quite some time.


This has been one of those things that has been nagging at me but due to some unidentified fear factor has only manifested itself after some help from good friends and friendly professionals.


The final impulse to getting my new channel out was a 7 day video Facebook challenge I took part in just a few of weeks ago with Rachel Dunn and Michael Hole and their Girl Director Company. It is just  little things that make all the difference. My friend Janet Blake has been a marvel in supporting and helping me to get over the live. She has promised to make conversation videos with me on regular basis which means that there is much to look forward to. There are also lots of other wonderful people who have said yes to conversing with me about many issues concerning us today in relation to LOVE ON THE LINE.


There are many topics that come under this flag, so to say. There are also other subjects in the planning. One of them being my SAGA HEALING JOURNALING AND RECREATING YOUR STORY FOR RECOVERY eCourses that are in development. My head is just spinning with all the new things I need to learn.


It is all for the good cause, I say. The goal is to highlight HOPE, RECOVERY and HAPPY ENDINGS possibilities for trauma recovery. Of course, all this stems from me becoming a target of a romance scam and writing a book about it. It has developed into a lot more that I thought possible.


So, now it is over to you. Please enjoy Episode 1 of the LOVE ON THE LINE TV CONVERSATIONS with Janet Blake and I. It is the so called behind the scenes approach. I have included the full script here so that you may also read the conversation if you so prefer.


Thank you for reading, listening and watching.

FULL SCRIPT OF THE CONVERSATION Episode 1 LOVE ON THE LINE TV CONVERSATIONS: Behind the Book.


This be our trial one, taking about where we are at and talking about book launches and LOVE ON THE LINE, even if it is in the tree.
Welcome to the LOVE ON THE LINE TV Conversations with Janet Blake and Elina Juusola
Janet: And Elina is the author, in case you haven’t heard about it somewhere along the line. In the, shall we say, momentum, leading up to this, of Love on the Line
Elina: Here’s the book
J: Her first book.  Before we just have a bit of a chat. You have just written a book
E; I have, and it’s actually been published
J: And you know what, from listening to you. Congratulations on that. This book, you are welcome, has been what twenty something, maybe longer in the making or incubating?
J: And this whole process has been nurtured by a number of people?
E: Yes

Posted by Unknown at 7:11 PM No comments: 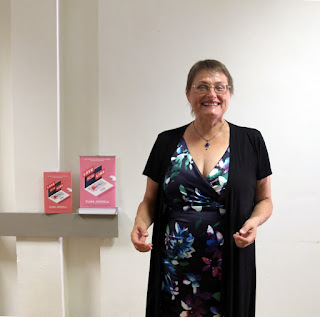 
The year 2016 has been very exciting for me as many people know. Firstly, my book Love on the Line. How to Recover from Romance Scams Gracefully and without Victimisation was published in January with the hugely successful book launch at the Avid Reader Bookshop in Brisbane. There was another launch at my local Gympie Library in February. I was also able to speak about the book in my mother tongue Finnish a few times, at some of our community events, the largest being the Suomipäivät (The Finnish Festivall This was not only in Queensland but also in Sydney with the Sydney siskot (Sydney sisters).We know that romance scams are the top #1 fraud crime in the world. It is a huge issue and we need to talk about it as much as possible.

I am really proud to say that my book has gotten a wider audience lately. All the reviews have been very positive. I am now launching a Library Tour first in Queensland and then interstate to further fraud prevention and specifically to help the people who have been targeted by romance scams.

My tour will start on the 6th of May at the Hervey Bay Library at 10 am. Everybody is welcome. Just remember to register. In June I will be at the Victoria Point Library on Friday the 24th of June and then at the Logan North Library on Friday the 15th of July, both at 10 am. Then after an overseas trip, we start again in September in Logan and Gold Coast. The schedule will be on my Website. I am also planning on new ways to spread the word about love and fraud prevention and recovery from targeted through LOVE ON THE LINE TV on YouTube and online eCourses on Narrative Healing Journaling. So, look for them on my website as well. For now here are some very interesting resent links about me and my book:

ABC Wide Bay Radio interview with Trudie Leigo aired on the 3rd of May at 10.13 am. It was also aired on 612 Brisbane State-wide later in the Drive program and there was a very nice article included in the ABC Local Top stories as well. Please, enjoy them and comment on them. Links are also posted on my Facebook page.

I wish you all the best. Especially I want to thank a Sydney artist Aila Peteri for the lovely picture.
Looking forwards to seeing you around in the library near you.
Posted by Unknown at 2:14 AM No comments: