Christmas is fast approaching. It is clearly evident that the shopping centers are starting to prepare earlier and at the same time people are too busy to notice and start thinking about it later and later. This is just the best time for the storybook characters to appear in their fancy best.

So, I found this Facebook page called 'Make your profile picture your favorite character until Christmas' and I 'liked' it. It was actually for the last year but who cares. This is cool, I thought and the next thing would be actually to do it. The picture attached to this posting shows where I have come to. My choice for this year will be the White Rabbit dressed as a Christmas character. I actually met him at the local shopping centre and was able to be photographed with him.

The first step is to decide if you like a traditional or recently created popular character as a favorite. Are you a traditionalist or a modernist? In the world of possible characters it makes a big difference. 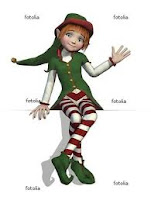 My choice of the White Rabbit dressed as a Christmas character is somewhere between, a traditional storybook character with a quirky look about him. Mr Carroll could approve that, I think.

2. Following the times or maybe not

Step two is deciding do you what to follow the times or do you want to keep to the old look.

Sitting in a cafe at my local shopping centre observing this year's children's storybook parade I noticed that the characters walk much quicker than before.

The Loony Toons characters that marched past us were very agile. They are also taller and more streamlined and they have long skinny legs. No wonder that they can dance and sing and jump around the stage like anything. The other storybook characters were clearly influenced by Dr Zeuss characters or by the latest Christmas films.

The most alarming observation in my mind was that the Mother Santa and all her elves were so small and skinny. She wore high heals to boot. OMG, I say. They were cute, though. The tiny elves with skinny, skinny legs all dressed in green and red. On the positive side, the number of the little elves has grown. Instead of one round Santa and an elf, there are huddles of them all around the shopping place, including the Cat in the Hat and the Chrich.

Going with the flow is my choice. It allows for full enjoyment of all the new that has been created and lets you be inspired by the moment. If the old is reinvented, all the best for that, too.

3. Being charmed or not

The third step is to decide if you will be charmed or not by this new development.

So, I chose to be charmed by the crowds of tiny Helpers and Storybook Characters. For my favorite character I had three contestants, namely the Moomin Mother, Mad Hatter and the White  Rabbit. 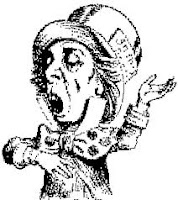 It was a tough choice until I met the White Rabbit in person. This is a point for direct marketing, I was immediately persuaded.
Merry Christmas Season to Everyone! Let's be compassionate in small things as well as the big ones this year!

- Posted using BlogPress from my iPad
Posted by Unknown at 5:46 PM No comments: