Last week, I got stuck in Amsterdam. There was a storm and I missed my flight and landed a great opportunity to be inspired by the moment in time in a great city.

My conclusion is that Amsterdam is not a bad place to get stuck in. It is merely the question of how to size this unexpected opportunity suddenly and without any preparations. Quick decisions had to be made of what out of all the possibilities a visitor could choose to be inspired by.

So, I chose the most obvious, the canals. It is the quickest way. After all, that is the most striking feature I know about Amsterdam, besides the famous tulips, of course.

After making your way to the Amsterdam Central by train from the Airport, you just walk across the street and hop on a boat that will take you around the city's canals for a day. There is a combi-cruise available, where you can hop on-and-off wherever you like. The coolest thing ever, especially on a dreary mid-winter day.

Then it is another decision of where to hop-off as with a sudden opportunity time is of the most importance as you have to catch the next flight home, for sure.

The other great feature I know about Amsterdam is that it is full of great art. Hoping off next to the National Museum then becomes quite a simple decision. But would there be time enough in two hours to absorb it all? I' d say no. So the next available inspirational, fit-for-two-hours-experience is the Van Gogh Museum, right behind the previously mentioned one. And Wow! 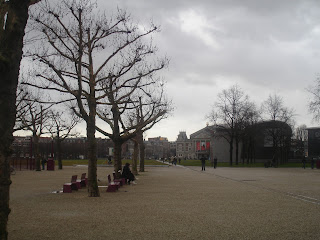 It is an inspirational tour of the best kind. To me, it was an exercise in turning the dreary into colorful. Van Gogh, famously, knew how to do that.

Let's see! Here we have a person, who adores dreary landscapes and colors but instead becomes the trademark for orange.

To make the long story short, here is an example of a person who, at the age of 27, after making a sudden decision of becoming an artist instead of selling art, works tirelessly at improving his skills. He is also confident enough to forgo critique and hold on to the inspiration to the end. It is a show of real self-confidence in one's abilities to be able to say that you are satisfied by your work of art and leave it at that despite of what anybody else says. 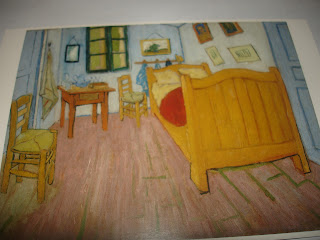 I was fascinated by the way Van Gogh was inspired by the Japanese art and how it can be detected in his work. His famous work, 'The Bedroom', for example becomes much more understandable with the background knowledge of where he took his inspiration from. It is much like after watching the special features of making a movie, you can better appreciate the completed work. The Van Gogh Museum has certainly succeeded in giving the visitor that experience.

Amongst the inspirational art that inspired Van Gogh, I also found Odilon Redon, a new favorite of mine in inspiring for the mysterious.

One of the art works also reminded me that I should re-read Emile Zola, which would then in it's turn inspire with the understanding how the rebellious mind of the youth of the 19th Century can be turned into great art pieces.

What I did take with me after spending an unplanned day in Amsterdam as a spectator for great architecture, landscape and art was the concept of inspiration application.

The opportunity is in all of us, despite the dreariness of the day. It is learning to size the moment and channeling every inspiration to make our day a worthwhile experience. Holding on to that inspiration and letting it move us towards an enchanted life then becomes a little bit easier every day.

- Posted using BlogPress from my iPad
Posted by Unknown at 4:22 AM No comments: