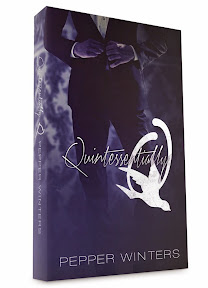 "A society is not a static thing, an object, a single entity. It is a system, an ever-changing network of interlocking relationships wherein the whole is - and sometimes qualitatively different from - the sum of its parts." (Starhawk, 1982)


I just finished downloading the third book in the 'Monsters in the Dark' series by Pepper Winters. It is called 'Twisted Together'. I am actually stalling my eagerness to read it as I am still thinking about finishing this blog on 'Quintessentailly Q', which is the second book in the series. So, I better get into it before tangling the third one.

Already her first book 'Tears for Tess', invited me to look closer to the popular culture behind the narrative than just entertaining myself. Just scroll back to a previous blog posting. This one is the continuation to it from a more literary angle.

In her second book, Pepper Winters (what an excellent name for an author) certainly is 'dreaming the dark'.

It starts from the attitude. That attitude might challenge the reader to reacquaint her/himself with the original Thomas Hardy classic about a maiden with a same name, in a controversial situation with her Victorian society. She was a good girls at that, just like our Tess. A girl with understanding of what is considered right action. A girl with a strong will. 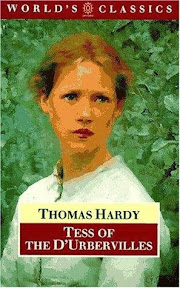 I remembered very little of the book from my university days, except the fact that I failed the test question about the name of her son, Sorrow. I remembered it was Misery, which would have been quite fitting as our Tess certainly is in such a situation for the most of the 'Quintessentially Q'.

Quincy, on his part in on the hunt, like what we all enjoy the type A males are supposed to be, protecting their possessions, their women from other type A criminals. It reminds me of the 'Deer Hunter' or maybe the moose hunt, all blood and core.

I certainly remember what goes down on a hunt. It was part of my childhood in Lapland. The real life hunt, where men stalk the moose for hours, maybe days, even weeks, kill them with one shot and bond over letting and tasting the blood and cutting the meat. Our lust for primitive hunter instinct must come from that long gone excitement of hands on hunting and providing. Pepper winters can really make the reader react to that. It is fearsome.

The moral dilemma of the book is clear cut, a man's deeper instinct versus decency and high morals in acting the right way in our civilized society. It is also about the underlying system that is not so clear cut but more about what is the driving force at any given moment to get what you want.

In our society it is money and power. And what is the most profitable trade in our world today? It used to be prostitution and pornography but human trafficking has overtaken that dubious honor in the last decade. What is that saying about our world?

So, I got up and picked a few of my most favorite feminist non-fictional classics off the bookshelf.

'Dreaming the Dark' by Starhawk was one of my absolute favorites. The appendix of her book still presents the most striking academical analysis of the medieval society that produced the witch hunts as a way to qualify the rightfulness of the Church's violence against those who opposed it's power. It also was the way to illustrate the hate of women in a deeply sexual way as a system of power over and man representing the emerging rational scientific way of life over the natural organic way of women's lives. 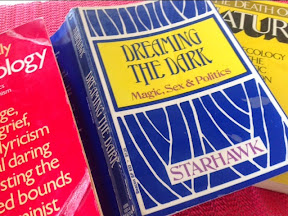 'Malleus Malificarum', the book on how to recognise witches is a perfect example on how that violent practice lead to a violent culture supported by the majority. 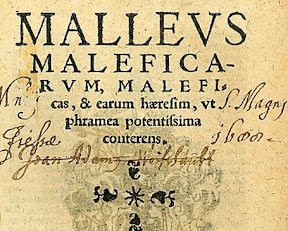 In her book 'The Death of Nature', Carolyn Merchant dissects the medieval and through the renaissance society in changing from the natural order to the mechanical frame of mind which supported the modern power over cultural framework.

What I remember from 'Gyn/Ecology', a controversial book by Mary Daly is my utter shock in realising the multilayered violent cultures in our world. She described it as a 'House of Mirrors', where the violence is reflected from each wall resulting in total confusion about what is right and what is wrong action.

So, what is the popular literature trying to say to us about today? How is the modern romance literature depicting our deeper fears? How is this mirroring our life? Is it just that while the deeper animal instincts are getting the better of us, we are trying to prove that in some cases this overwhelming violence can be overcome by decency and grace.

Well, that is what 'Quintessentially Q' is telling me in its way of handling the storyline. It is giving me hope in that someday it is possible to change the violent culture and heal the ever widening gap between right and wrong action. We might even need books like that to work through the real life confusion and the real fear about our own safety in this seemingly secure world.

I am still reluctant to start the third book. What if she is making it worse? Well, never mind, the show must go on and the authors must play by the rules.
So, see you at the other end of 'Twisted Together'.

Posted by Unknown at 8:23 PM No comments: