The Senior Park at Hyde Park in London 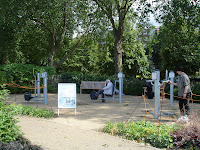 A few weeks ago (June 2010), a new ‘Play Park Area’ opened in London at Hyde Park. The park is specifically targeted for the use of older people, those who are 60 years and older. The opening of the Park was very well covered in the media around the world.


Immediately upon reading some articles about the Senior Park as a concept I became very curious and wanted to investigate it further for the benefit of my own community. If the concept would be suitable, I thought, we could consider a similar kind of project in Australia. The weather in Queensland certainly is right for outside activities around the year. A Play Park Area like that could be an ideal addition to a Community Care Centre which does not have space enough for an indoor gym but is suitably positioned next to a park and secure enough to run activity programs for older people, including toilet facilities and a possibility of a cafe. 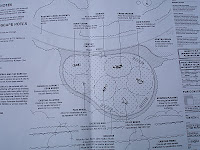 The aim of the design and construction of the Play Area according to the ‘Older People’s Play Area, Design and Access Statement’ was to “provide the greatest health benefit and ease of access while creating as little visual impact upon the surrounding landscape as possible.”


Some issues the project management has considered: 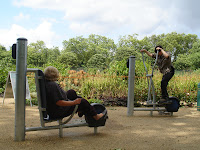 The Senior Park is situated in an enclosing with the Tennis Courts and the Lawn Bowling. The only entrance is through a Pavillion with toilets and cafe. It is enclosed by lovely gardens.


The setup of the Play Area is in a circular form. There are six low impact equipments situated in a circle, with three benches for social interaction. It is very easy to move around the circle between the equipment. The Park is enclosed with hedges for privacy and low visibility reasons. 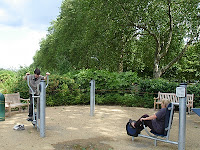 The only thing Emily saw as a possible issue was that there is a children’s play area quite near. The equipment is not suitable for children under 15 years. There have been some issues of some equipment breaking down. It could possibly be due to usage by children.

I was really interested in what the difference is between just having gym equipment in a park and the concept of the Senior Park. Emily said that it is mainly the setup of the equipment where the social angle has to be taken into account; that the park is provided with benches for the possibility of socialisation. The other difference is in the circulars setup that enables easy access to the equipment. The visitors do not need to walk between the equipment like with the trim trail. 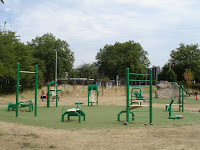 This is a gym equipment area at Leyton, London, with rock climbing and a circular Trim Trail setup for vigorous usage. My son’s comment on this was that he never needed to be a member of a gym as he could go to this area and exercise as much as he wanted to on a daily basis during the summer months. 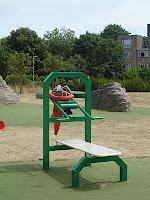 Also, mark how people have added weights to some equipment to get more out of them. Also the visibility is to be considered. Here all the equipment are green and create much more visibility although still less than children's play areas which are real high visibility areas.

Some links on the net about the opening of the Senior Park:

http://www.thisislondon.co.uk/standard/article-23835771-playground-helps-elderly-to-shed-the-grey-pounds.do
Posted by Unknown at 3:16 AM