Immediately after posting the Senior Park at Hyde Park report on my blog I got a few interesting emails as comments from people both from Finland and in Australia.

From Finland I got an email saying how interesting this kind of concept is, even though the person had not thought about it before. Next, I got a link to ‘Iltalehti’ and ‘Tamperalainen’ (a local paper) articles which were describing the process of building the first Senior Park or Play Area in Tampere, Norrköping Park.

This has led me to further think about the Senior Park in relation to the community capacity building. It is not such a simple concept after all or in any way a 'one fits all' kind of concept.

In the Tamperelainen article the Principal Park Ranger Timo Koski comments on the Senior Park equipment. The use of equipment is aimed at getting results. “Besides enhancing the muscle condition”, Koski explains, “the equipment is designed to specifically improve coordination and balance.” He also expressly states that the equipment is for the use of all age groups. No restrictions there. 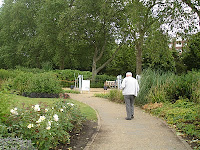 When discussing the Senior Park concept with Emily at Hyde Park, her comments were in relation to the atmosphere and the heritage the senior park would carry as part of the historically defined recreation area in London. The most striking thing there is the deck chairs which on a sunny day are filled with people enjoying the sun and casing over the lake. In my opinion they have also amicably realized their prior stated aims.

In Tampere, although the ‘Iltalehti’ uses the word ‘leikkipuisto’ as reference to children’s play which could work against the concept in older people’s minds as it is a bit degrading, the focus is on results. The park will even have a fitted rail along the edges to enable the walking practice for those people recovering from stroke or other kind of injuries.

The focus on results is a familiar concept to me in relation to HUR-gym equipment (also Finnish) and their use in aged care facilities across the world. The goal there is to improve the muscle condition for the elderly to allow a normal lifestyle as long as possible. The results are very good and often help the elderly to stay at home for much longer period and so save public funds in relation to unnecessary hospital or nursing home intake.

In the Finnish model of Senior Park (or Spanish as the Lappset concept of senior play areas was designed in Barcelona according to the Lappset Australian representative) there is no particular social focus in opposition to Hyde Park. It is not stated if there are any benches there. This does not mean that there wouldn’t be some.

The next contradiction is low impact and low visibility. The equipment in the Finnish model is colourful in opposition to Hyde Park gray look. On the other hand the enclosure in Hyde Park is surrounded by beautifully kept flowers and hedges and so creates a warm and cosy atmosphere. The Lappset equipment, on the other hand calls for an adventurer to try them on.

Some of the Australian people, who have commented, have promised pictures from their areas, where equipment is laid out in parks. I am hoping there will be more talk about this in the future.

As in what suits our community in Jimboomba or Logan, the discussion is just starting. I am hoping the thoughts presented here and the general information about the subject will help us desire on an initiative that enhances our community and works to improve our services.