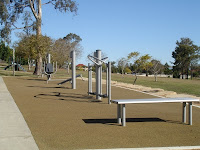 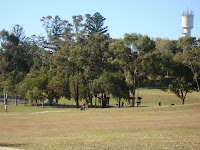 It is interesting what can be found if one pays attention to detail. Not that I say, I do. For example not before a PlayWorld, play equipment representative, from Western Australia, had a telephone conversation about the concept of LifeTrail with me last week, did I know that 15 minutes down the road where I live, in the Limestone Park, in Ipswich, there actually is one. This is how it works in reality. 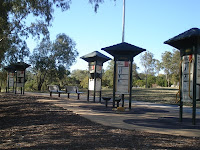 One is alerted to something through media, like I was impressed by the worldwide media coverage of the opening of the London Senior Park at Hyde Park. I was inspired by the idea. It fits with the development of services desperately needed in my own community and within the framework of the services provided by the organisation I work for. I was able to visit the London Senior Park on my trip to Europe and I was lucky enough to speak with the park project manager (see my previous posting on my visit there in July). From there on, I have found that there are many different solutions that have been realised by many countries, councils and places in order to get the public noticing that healthy living and regular physical exercise should be at the forefront of their mind. From being inspired by an idea, there is still a long way to actual regular exercise. For example Lappset (also introduced by a previous posting) playground equipment for seniors was developed in Spain and is manufactured in Finland. PlayWorld is an American invention. LifeTrail consists of low impact exercise stations that can be organised along a pathway for people to stop to use at their own leisure while walking at a park or a provided area. The stations are especially suitable for people with moderate exercise in mind and those who are over 65. The exercise equipment nodes are mainly meant for adult use. 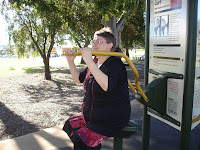 I knew that there is an exercise node at the Limestone Park in Ipswich. My son regularly bikes past it and has taken me there after I became interested in the Senior Park concept but I was unaware that these nodes are part of a larger LifeTrail setup. They are not detectable through Google Maps satellite pictures, not yet at least. Last Saturday my daughter and I went to investigate. 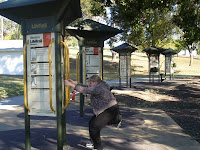 I parked near the node I know exists and went to take pictures. From there I could see another node in the distance. Afterwards I found yet another one. These nodes are connected by a concreted pathway which is suitable for a wheelchair, if needed. I also found a parking place near the presumed start to the LifeTrail with five stations. My daughter, who had left her wheelchair home, had a hard time waking, and the slight slope of the path stoped her way completely. Luckily there are some benched provided in each node, so I could walk by myself while she sat and waited.

I talked to a woman who parked next to our car asking her if she used the stations while walking. “No”, she said. But she told me that the Ipswich Hospital walking group uses them in early mornings and that she knows they are well used by others. On a Saturday afternoon, the pathway was relatively empty, just a couple of families. The sporting ground was in use, though. 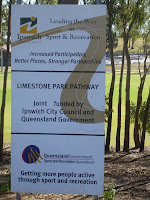 Limestone Park is a nice place to visit. It is a large area, well suited for the LifeTrail setup. I was quite impressed by it. I am quite prepared to add the visiting to the park to my list of suitable picnic areas. I could walk there quite happily. Taking my daughter, who is in a wheelchair, to the park would be a bit more difficult as I would need to push her wheelchair along the pathways and up the slopes. I also noticed that the material the stations are made of is plastic. Although high standard and able to stand the weather, ecologically thinking some re-designing could be used there. All in all, I am very happy to have found such a remarkable setup near home. The arrangement is a wonderful sports and recreational initiative by the Ipswich City Council, Sports and Recreation and the Qld Government.
Posted by Unknown at 1:47 AM