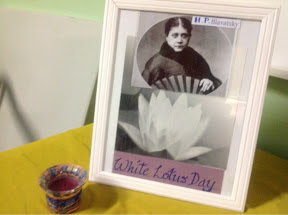 Last week, I was honored to have been invited to speak at the Theosophical Lodge of the Sunshine Coast at Buderim and the Tewantin in honor of The White Lotus Day.

Helena Betrovna Blavatsky died on the 8th of May in 1891. The day came to be remembered and celebrated annually as the White Lotus Day.

Helena wished that people would remember her passing by reading their favorite passages from the Indian epic 'Baghavad Gita' or from the 'Light of Asia' by Edvin Arnold.

For my speech, I chose the first line of the Badhavad Gita: "Dharmaksetre kuruksetre..." Or "On the field of virtue ..." and the 58 verse from chapter 18 of the same epic: "Keep your attention on Me, for if the attention is on Me, you will pass through by my grace ..."

I compared it to the note in Blavatsky's 'The Secret Doctrine' where she explains that it is the personality that must 'cling to the Monad' or otherwise perish.

The esoteric tradition has an understanding that always at a beginning of an age the humanity has been given some new esoteric teachings to follow in order to expand the universal consciousness of humanity. The Theosophical Society was founded in 1875 to ensure that humanity would not fall to utter materialism in the 'coming of the new age' which we have just arrived at.

The Baghavad Gita was written at the age of Aries. The Bible was collected for the age of Pieces and now we have the Quantum Science for the more secular Aquarian age. The teachings seems to be compatible, the method, the wording and the interpretation changes according to the current understanding of humanity.

Monad theory was introduced to the world by Madame Ann Conway, who was the most brilliant pupil of Henry Moore at the turn of 18th Century. (Look up 'The Death of Nature' by Caroline Merchant). The theory was then spread to the population by Leibniz and he also got the credit for it (even in the 'Isis Unveiled' by Balvatsky) due to that women were writing as pseudonyms at the time.

According to the Theosophical Doctrine, there are three kinds of evolutions: the physical, the intellectual and the monadic. The two first ones are well known but the monadic one is mostly unknown to many.

The Monadic Evolution happens in the 'non-locality', where everything is possible. The only thing for a personality who hopes to participate is to elevate itself enough to imprint on the monadic current that enables the memories of the higher consciousness to be passed on to the next incarnation in the ever evolving passage of the monadic evolution.

We are like a holograph of the imprint of a reflection of a Monad that drifts in the current of its own evolution that we cannot even begin to understand as it is outside our imagination and can be anything and everything in space in nothingness.

We can only hope for that through our physical and intellectual evolution we can in time understand the world and the reality we live in a little bit better in order to get to know a little bit more about the purpose of being and becoming.

It is the days like 'The White Lotus Day' that enable us to focus our thoughts in the 'unthinkable' and 'unimaginable' for a few moments. The days like these give us hope that some day, in some new age, we might get to understand how and why we are here and that it was not by change but by intention and purpose that we can live our lives to the full, now and always.
- Posted using BlogPress from my iPad