Notes from the ‘Communities in Control Conference' in Melbourne, Part 2 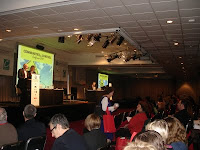 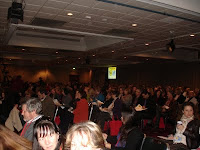 In hindsight, the first thing I can say about the ‘Communities is Control’ Conference, 2011 is that I am really happy about being able to have taken part in it. ‘My Community’ has done a lot of work in providing the Australian Not-for-Profit (NFP) Sector and particularly the community organisations with a conference that as closely as possibly strives to meet our current needs for networking and updates us about the changing climate on where we work today. Without this conference I would have had to go to great lengths in trying to find out about the burning issues that many organisations are facing today while reviewing the sector or our changing relationship with the different layers of Government.

Sitting two days in a conference with about 1000 other people from all over Australia, often engaged in conversations was not such a hardship at all and I am considered a conference pro.

The second thing I noticed when coming to register was the people who had come to partake in the conference. They seemed to be from all walks of life. So many different kinds of communities were represented. It was easy to start a conversation with anybody and everybody. In fact, one didn’t need to know anybody beforehand to make friends. 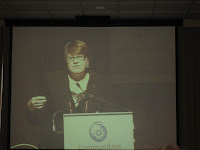 According to Linda, this Government, instead of just talking is ready for action in harmonising regulations, striving to cut the red tape and straightening out the prevalent problems of the NFP Sector.

The good news is that the Government has already installed the Office for NFP Sector. It will engage with the Sector as a whole with four working groups and look into:

There will also be an overview of the definition of charitable organisation.

The other highlights for me on the first day were the Joan Kirner Social Justice Speech delivered to us from Brussels by Sharon Burrow, who is there as the General Secretary of International Trade Union Confederation (ITUC). She strongly advocated the international work the unions are doing in highlighting the blight of many nations in their treatment of the workforce, particularly women. The role of ITUC was also highlighted in its role of advancing social justice and equality to the world’s workforce. As a Finn, I was delighted to hear that President Halonen from Finland might have a future leadership role to play in this after she completes her time as President next year.

As a Queenslander it was also interesting to observe the role The Hon. Joan Kirner, the former Victorian Premier and the current Community Sector Ambassador to Australia, plays in the whole conference, not only through the social justice oration but through the warm atmosphere surrounding her and her ease in striking conversations with different members of My Community leading people as well as all the invited speakers.

As a newcomer to the community sector conferencing in Australia, it is interesting to observe that we have here a person who is highly respected and has a huge impact on the way the sector is conducting its business. As a historian, I can only remember similar kinds of conferences that I have participated in where one particular person has had such an impact in the women’s liberation movement during the 1980’s where the huge ‘feminist legends’ were still taking part in the conferences. It is clear from the conference that Joan Kirner is one of the big runner-ups for women’s advocacy in the Australian context.

I also enjoyed Hugh Mackay’s speech on his just published book What Makes Us Tick? It presented 10 social desires that we as human beings are subject to and that affect our community. It caused huge lines afterwards at the stand where his books were sold. It can be said to his credit that he signed every one of them, even though mine was the second last and he was already standing up as the next session was starting.

Miriam Lyons was a little bit fast in her speech pattern for me to catch everything she was saying about the book called More Than Luck but she was very witty and I was absolutely delighted to observe her smile and the first thing for me, when I get home is to download the book as a free eBook on the Website. 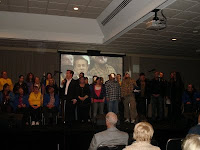 The last delight on the first day was the Choir of Hope and Inspiration [previously the Choir of Hard Knocks]. We heard the first ever performance of their first musical which will be performed in September.

The second day went from strength to strength.

Phil Ruthven presented us with a lot of statistics and forecasts for the future. Basically he said that we are now at the height of our lives in what comes to health, life longitude, wealth and wellbeing and it is only getting better. There will be more wealth, longer life expectancy and more health. That is the upside; the downside is that there will be a lot of change.

But we do thrive on change as human beings anyway, so the forecast is good, if we take it as such and apply a healthy ‘grain of salt’ to our expectations.

His speech very much made me to want to live longer in order to see for myself if he is right in his predictions. Living to 100 just might not do it. To succeed, that means that I now have to make sure to apply all the possible new inventions in health and wellbeing which he forecasts to be many.

The absolute highlight of the second day was the launching of Advancing Women: Women and the Order of Australia and the speech made thereafter by Elizabeth Broderick, Sex Discrimination Commissioner and Commissioner Responsible for Age Discrimination.

What has been the best part in the conference was meeting new friends. Even though we know that all the speeches will be online afterwards and that books can and will be bought the personal dimension of actually being there, participating in the discussions, meeting others, networking and starting to build those important relationships. There is nothing that can take away that.

It proves the point Hugh Mackay said about the desire to be connected. Through participating in this conference, we have strengthened our belief in grass roots communities and our conviction that people have power to influence change.

The conference organisers are very proud of the fact that with the help of Victorian Government funding and other sponsors, this conference has the lowest entrance fee of them all. That actually was reinforced time after time with conversations across the room as many told me that their boards did prefer to send them to Melbourne than pay an entrance fee in the nearer city, as counting together flights, accommodation and food with the entrance fee, the Communities in Control Conference still costs less than other competing conferences available during this month. Interestingly enough I was unable to find it on LinkedIn. Hopefully that will be amended next year. 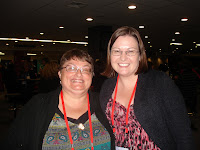 Our new ties with the original ‘early bird’ group on Sunday held to the second day. It was nice to be able to say ‘good morning’ to people you know already and exchange experiences with them from time to time during the conference.

I also ran into friends from Queensland. There were many as a matter of fact. Observably, judging from the question times and counting the numbers, the Queensland participants to the conference were close to Victorian numbers.

All and all this was a very delightful conference experience, worthy of replay and recommending to others.
Posted by Unknown at 1:21 AM