Special Report on the TAINTED LOVE. Exploring the Reality of Romance Fraud. Symposium in Brisbane 31/05/2016 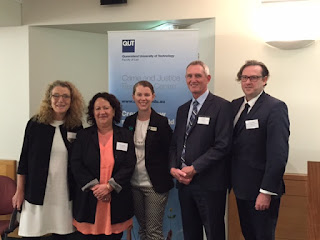 Delia Richard, Sharon Armstrong, Dr Cassandra Cross, Davis Hillyard and Prof Reece Walters
This report here is the written out version of my  LOVE ON THE LINE TV CONVERSATIONS, SPECIAL REPORT on the TAINTED LOVE Exploring the Reality of Romance Fraud SYMPOSIUM.

The YouTube Love on the Line TV Conversations Report

Here is the script:


I am really pleased to welcome you to the Love on the Line TV Conversations SPECIAL REPORT on a very exciting event. Namely, the ‘Tainted Love’. Exploring the reality of romance fraud. A Symposium that was held in Brisbane last week. (31/05/2016)


The Symposium was organized by Dr Cassandra Cross and hosted by the Crime and Justice Research Centre at QUT.


I was privileged to be in attendance and display my book Love on the Line at the symposium, of which I am really grateful for. Because, we need more of the stories of the victims of romance fraud to be shared amongst the public.


What I am showing you here are the highlights of the Symposium as I experienced them. It is my take on the issue of romance scams. Especially about the prevention and support of the victims to enhance their or our recovery as I myself am one of the survivors.


If later my report inspires you to listen or see some of the whole speeches given at the symposium, the link to the recordings will appear below when it comes available. But you can check the QUT Crime and Justice Research Centre’s Website through the link.


I should warn you, though,  that this report does not give you all the details of Ms Sharon Armstrong’s plight when she was scammed to becoming a drug mule through a romance scam and arrested in Argentina and imprisoned there for two and half years. You can read all about it by clicking the links provided.


What I heard and am reporting here is how I relate to her personal survival and recovery story from the incident which started several years ago and has impacted her whole life and will impact just about every decision she makes from here on. I am very pleased to have recorded a separate Love on the Line TV conversation with her. So, stay tuned and subscribe so that you will not miss is for it is in the making.


It is warming to my heart to witness such compassion in an event of this kind and willingness to practical action in order to resolve issues around romance fraud although we know how ineffective our work sometimes is as there are more and more scammers appearing. But what is the most important issue that is being touched here at the symposium and can be changed is the way the victim survival and recovery is handled.


Sharon Armstrong’s story has touched me deeply. We met the first time last year when she was invited to speak at our QLD Police Headhunters for the Fraud Prevention Support group. This group meets every second Sunday on the month. Then, I blogged about her. Just click the link to read it.


Sharon’s story has similar kind of elements to mine. She fell fast and hard, just like me. She is a person who has had previous experience about similar situations which could have applied to her scamming circumstance if she would have known to see the connections. Just like me she did not.


His first message to me had me hooked, like I never been before.
To cut a very long and sordid story short, I fell hard and fast.


I should have recognised the grooming that was accruing. I mean in a previous life, I had worked within corrections and I had had many of encounter with sex offenders and opportunities to study their technique. But no, I had my rose coloured classes on.


With the benefit of hindsight, I now believe, the scammers respond to your insecurities, your desires and your kindness. They look for those who are trusting, compassionate, and looking either consciously or subconsciously or unconsciously for someone, or something to fulfill, what you feel will enrich your life in some way.


The fraudsters are clever and can change their technique as quickly as the need occurs, because when Sharon at first was anxious about the situation and just about nearly told the scammer that the situation with him and her was ‘too good to be true’. He told her that it was not about the money.


He tells me I would be his PA. Really, his fiancée, he says. How funny is that? I think now. Me, who has never held any intention of ever marrying again was being excited by the thought of this man wanting to marry me.


Sharon’s story is very moving. To me, it is very incredible that a woman of this caliber would be able to be scammed and framed like she had been. But thinking of how I too fell and was duped although my experience was just a brief encounter compared to hers, I now understand better the depth of the betrayal, she went through. She did all the right things, checked all the right sources, including the man’s said company, although she did not know then that later it was taken off the Internet. Luckily her family was her backbone, though.


I remember promising them that I would cope and I would get through this, regardless of the consequences.


I went through feeling of huge shame. The knowledge that my family was suffering and that I should have known better was overwhelming. Most days, I kept torturing myself as to why I hadn’t seen all the signs that now seemed so obvious. Finally, I reached the point where I knew that these thoughts were not healthy. I didn’t want to feel like a victim - anymore. I came to realise that I would survive this and come out with new knowledge and understanding of how these things happened.


So, how did I achieve this?


Family, friends, strangers support and unconditional belief in me, prayer, humour, positive thoughts, remaining focused, routine, working within the prison and knowing ther is always someone else facing tougher challenges.


Listening to Sharon made me deeply grateful to know that there are people who have taken up the fight for the survivors of romance scams.


The next speaker was Dr Casandra Cross herself. I have been impressed by her research, both previous and the new one.


Just to give you context. I’ve been researching in this area for just over eight years now. In the previous life, I actually worked for the QLD Police service and that was where I was introduced to the problem of fraud. And that is when I started to talking to people like Sharon, who were brave enough to share their stories.


When we think about romance fraud; what exactly is it? I know I’ve had lots of questions, I guess from a lot of media, I’ve done. How is romance fraud different to just a bad relationship? And, I think they are both bad relationships. I think many people would agree with that.


I can certainly say from the victims that I have spoken in this current research that it’s the loss of the relationship that is actually , I think harder to take, sometimes, than the loss of the money. Because that is what has the significant impact on them.

Dr Cassandra Cross stressed again and again that the impact of romance fraud is far greater than just the money. The feeling of shame and the blaming the victim looks to be one of the main problems of the victims not coming forwards and sharing their stories. The new research Cassandra is taking on will be explaining romance fraud from the framework of domestic violence. That is certainly my understanding and experience that there is a direct link there to be found. So, I am especially excited about the coming research and am looking forwards to having a Love on the Line TV conversation as well.


The two Government Officials who were in attendance and speaking at the symposium were very compassionate people and I was so happy to meet them.


Delia Richard spoke of all the interesting action the Australian Competition and Consumer Commission is taking. She said that the romance fraud is a number one priority with the Scamwatch.


She also addressed the misconception about who and which gender was more targeted by the scammers. According to her the ACCC statistics show that it is about 50/50 but that men lose a bit more money. Delia praised Cassandra’s new research as very important because it will connect the romance fraud with the domestic violence and many victims ‘not so uncommon’ past relationship experience with violence in the family they grew up with. It can easily predispose the victims accommodating behavior as the keepers of peace in their relationships.


Lastly, David Hillyard who talked about the very successful Project Sunbird in Western Australia. I had previously heard a lot about this project and was very excited to hear what he said.


I said before, the earlier we intervene, the less losses people sustain but we are not stopping it. Programs that are out there that the scammers are operating, the criminal groups that are operating out there are recruiting as fast as we stop it.


So, I guess our last message is: They are still coming. And they don’t stop coming.

David finished with: “It’s a strange old world we are working with.” And I am certain he knows and has great experience in working with those people who need convincing about the fraudsters being what they are. Luckily he also said that by sending letters to people that have been sending money offshore, progress is being made. So we ended up with a hopeful note on all accounts.


I certainly learned a huge amount about romance fraud and I am able to go forwards to work on my own small way to raise the awareness about romance scams around the place.


I very much thank the speakers and you all for watching and listening. This will all be in my blog and on YouTube so keep subscribing. There is more to come with the Love on the Live TV Conversations. Next it will be that conversation with Sharon Armstrong I promised before, so stay tuned.